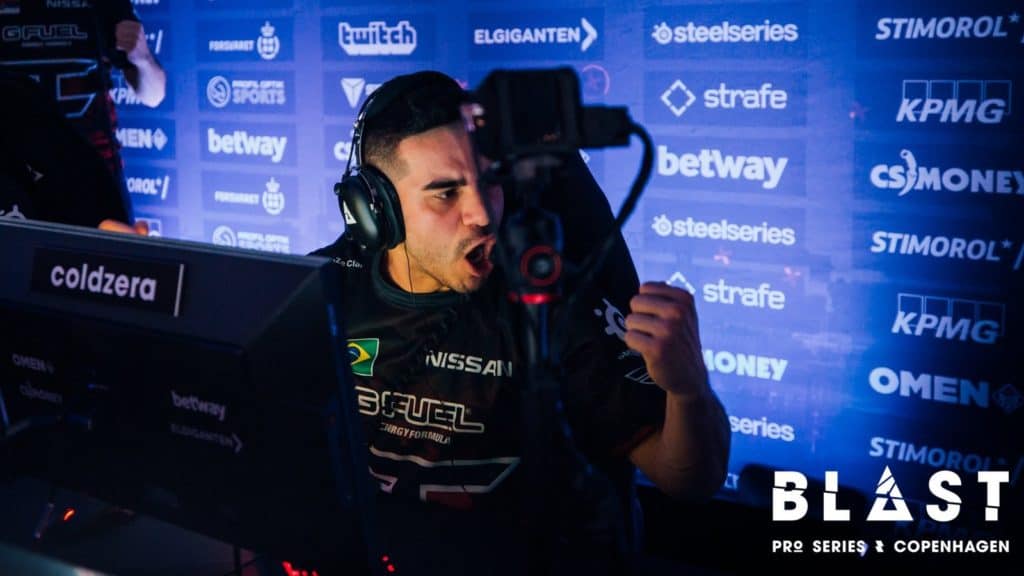 After an intense Grand Final against Ninjas in Pyjamas, FaZe Clan emerged victorious as winners of the BLAST Pro Series Copenhagen.

FaZe Clan have been crowned as the final BLAST Pro Series champions of 2019 at the Royal Arena in Copenhagen, Denmark. The European mix took down Ninjas in Pyjamas in the Grand Final, shutting out the Swedish side with a 2-0 sweep. FaZe lost only one map throughout the tournament, falling 5-16 to Team Liquid in the group stage.

The Grand Final kicked off on Nuke, the map pick of NiP. Shaking off the pistol round loss, the Swedes raced to a 6-2 lead on their offensive side. FaZe pushed back, taking five out of the next seven rounds to end the half 7-8. Once on the defense, the Ninjas took five straight rounds before FaZe could put themselves on the board. NiP answered back to FaZe Clan’s one round, reaching map point at a 15-8 scoreline. The EU squad rallied together, stringing seven rounds in a row to force the map into overtime. NiP finally found their form again, putting two rounds on the board to secure a lead. FaZe pushed forward, putting up four consecutive rounds to steal the map 19-17. The map ended with both Patrik “f0rest” Lindberg and Olof “olofmeister” Kajbjer putting 30+ kills on the board.

The series then went to Dust2, the map choice of FaZe Clan. A pistol round win for the Ninjas was swept aside as FaZe stole the second round with a force buy. On the defense, the EU mix took a quick 5-1 lead before NiP found their footing. Six consecutive rounds came for the Ninjas as they took the lead on their offensive side. FaZe closed out the half with three rounds of their own, putting them up with an 8-7 scoreline.

Now onto their defensive side, NiP looked ready to steal their opponent’s map pick as they kicked off the second half with a four-round streak. FaZe finally put up their first offensive rounds, tying up the score at eleven. With the Grand Final slipping away, NiP secured one more round to take back the lead. Determined to take the victory, FaZe pushed forward. The European squad strung together five straight rounds, with Nikola “NiKo” Kovač and Marcelo “coldzera” David securing an unlikely 2v5 to close out the map 16-12.