Week one, day one of the Duos Fortnite Champion Series is in the books. See how all of the action went down in all regions.

The Chapter 2 Season 2 Fortnite Champion Series is officially off and running with a duos format in a brand new season. After all, with a $5M USD prize pool on the line across all seven competitive regions, players finally have something to work hard toward over the next four weeks of the tournament. Day one of the Duos FNCS featured some of the best teams going toe-to-toe in two separate rounds of action. The top 1,000 duos in Europe, NA East, NA West and Brazil withered themselves down to the top 50 who will compete in the final round of week one.

For the remaining regions of Oceania, Middle East and Asia, the top 400 duos advance out of round one and the top 50 in round two move on to the finals. Let’s take a look at the top-ten placements in all seven competitive regions and how the action will setup for round three tomorrow. Keep in mind that the Middle East finals finished early this morning.

Nearly 50K duos competed in the open round of week one in the European Fortnite Champion Series. Round two saw 1K duos battle to make top-50 and qualify for the final round of week one. Some of the best players across the continent went to war, and c4loverKubx and Kami came out with a first-place finish in the semi-finals. They only managed to complete eight out of ten matches but made them count with 49 eliminations and a Victory Royale. Wolfiez and LeTsHe continue to impress with another high placement in duos. DreamHack Anaheim Champion, 100T MrSavage and new teammate IDrop 74 took fourth with 84 points.

Liquid Cented and NRG Edgey journeyed to NA East for this season of the Fortnite Champion Series and clearly brought immense talent with them. The NA West standouts achieved first place in the semi-finals with 88 points. We can safely treat this performance as a statement out of Cented and Edgey. The prize pools are definitely more robust in NA East and these two are putting all NA East opponents on notice. We will have to see if this momentum can translate to a qualification in week one.

Team SoloMid’s ZexRow and MackWood are a newer duo to competitive Fortnite and are looking solid thus far. They amassed 84 points over nine total games and three Victory Royales. Many fans predicted ZexRow and MackWood to perform well, and this performance will segway nicely for them into the final round of week one where they’ll be seeking a top-20 showing at least to qualify. Bugha and Stretch compiled 84 points of their own to advance into the finals round. Veterans and multi-tournament champion NRG Zayt and Ghost Saf also put up 76 points to reach the week one finals as well. Other Notable Duos Inside the Top-50

The NA West FNCS week one round two final standings saw Bumboy and 4DRStorm take first place with 85 points. Though they were unable to complete a Victory Royale, their placement and eliminations did the work for them. The NA West Duo Scrims are speaking volumes for some of the lesser-known duos competing in the Fortnite Champion Series. Controller players Thomuss and wavyjacob followed with a second-place finish, eclipsing 50 eliminations and with one Victory Royale.

Also inside the top-ten are the relatively new duo of 100T Arkhram and andreww, as well as the veterans and long-time duo partners, NRG EpikWhale and 100T rehx. Despite having smaller turnouts in large competitions, NA West houses some of the elite players. We just saw Edgey and Cented take first in NA East, so expect some fireworks tomorrow between the top-50 NA West duos. 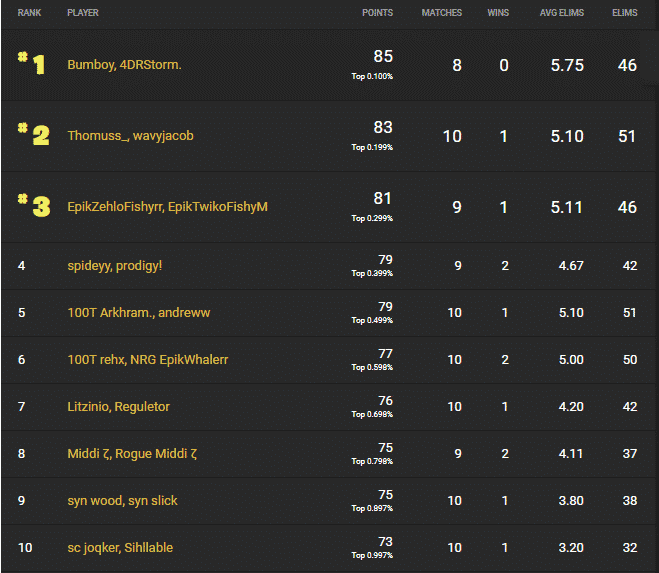 Chapter 2 Season 1 standouts RepulseGod and Alecc took first convincingly in the semi-finals of week one in the Oceania Fortnite Champion Series. They commanded the leaderboard with 77 eliminations and two Victory Royales en route to 119 points. They move into the finals with all eyes on them. Gooboz and worthy came up short of first with 107 points but managed three Victory Royales in total. Other teams atop the semi-final leaderboards include AO Summer Smash Champion, Breso and his duo partner, Dylan. Caryion and new teammate volx placed ninth and are in a solid position heading into finals. RED Dusty and Scream dominated week one of the Brazil Fortnite Champion Series semi-finals with 118 points, including four Victory Royales and 66 eliminations. Following them in second place were C9 blackoutZ and SNG KING with an even 100 points over nine matches and three Victory Royales. Although behind by a sizable margin, points will matter much more in the finals. Twenty total duos will claim their spots early and advance out of week one in the finals tomorrow. Peterpan and IU earned 100 points and first place in the Asia week one FNCS semi-finals. Although they only played seven of ten possible matches, Peterpan and IU out-slayed their opponents with 71 eliminations. Those eliminations counted for well over half of their points. Axicx and Swillium took second with 97 points and four Victory Royales. The top ten teams below advance to the week one finals alongside 40 other top Asia duos. Pancake and TSK Mev narrowly escaped the Fortnite Champion Series Middle East week one finals with victory and $1.13K USD in prize money. Their 53-point performance included 21 eliminations over six matches. They also managed two Victory Royales in the finals. They’ve secured their spot in the FNCS semi-finals coming up next month. In second place and winners of $800 USD are TU Nm7 and TSK Rv. The remaining top-ten duos have also put themselves through to heats on the first week of play. 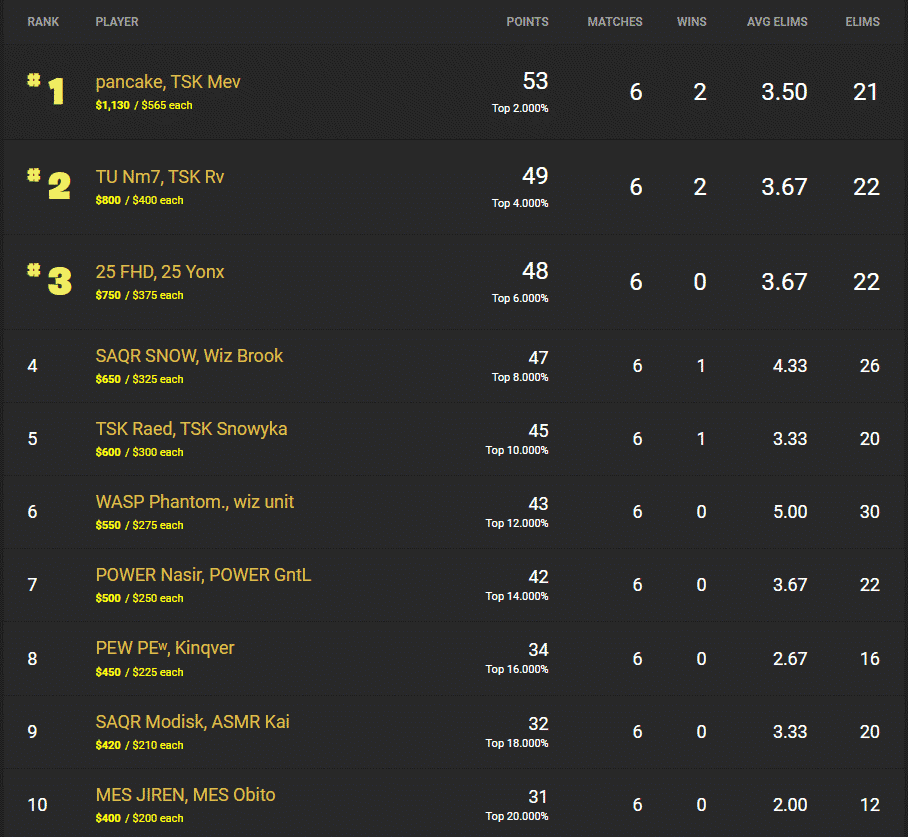 Stay tuned to ESTNN to see who qualified out of week one of the Chapter 2 Season 2 Fortnite Champion Series!