In the second Semifinal of the weekend, G2 Esports and SK Telecom T1 fought for their spot in the 2019 Worlds Finals.

The 2019 World Championship Semifinals are now over. On the first day, FunPlus Phoenix brought down Invictus Gaming to set the stage for the Finals. The two teams of the second Semifinal match, G2 Esports (“G2”) and SK Telecom T1 (“SKT”), now had to battle for the right to challenge FunPlus for the Summoner’s Cup. These were to tournament favorites with extremely high expectations but only one could move on. This was a series worthy of being a Finals, and though it wasn’t, it is one no League of Legends fan should miss!

The first game showed how great this series would be. It was a game that showcased the teams’ macro play and intelligence, with G2 coming out on top in the end. The opening minutes were quite crazy, with both supports going mid to gank for their mid laners. Through this, Caps received First Blood but SKT got two kills for one overall. With this, SKT had a slight advantage, which they leveraged to a larger one with multiple towers takes, including the First Tower bonus.

But G2 refused to allow SKT to snowball further through the team fighting that SKT wanted. Caps and Wunder played the side lanes quite well and they made SKT constantly lose pressure mid to respond to them. At 26 minutes, SKT set up around the Baron, but G2 was fine with this as they pushed bottom. G2 gave the Baron to SKT because they destroyed SKT’s bottom Inhibitor to give themselves a point of pressure. Sticking to the game plan, SKT pushed mid, and it looked great for them as they killed Caps and took the second mid tower.

But they couldn’t do much more damage to G2’s base past this. The game stalled for a few minutes, until SKT caught out Caps in the bottom lane seconds before Baron spawned. It was a 4v5 in favor of SKT, but Faker made a crucial positioning error and was killed for it. Once again, this delayed SKT’s game plan. A minute later, the two squads met at Baron again, and finally, a full team fight erupted. G2 completely obliterated SKT in a narrow chokepoint and Ace’d them before Realm Warping minions into SKT’s base and claiming the first Nexus of the series. The series heated up in Game Two, as SKT clapped back hard to take their first win. They had a more split-push focused composition and were able to both utilize this and team fight to great success. The action started off at level one, as a skirmish broke out that ended in a one-for-one. The rest of the early game was similarly even, as the teams traded kills at certain points as well as towers. But SKT made the more impactful plays, as they took the First Tower bonus and a huge team fight win in the middle lane five-for-two.

That team fight really broke the game open for them. Though G2 theoretically had the better 5v5 composition, they couldn’t adequately deal with SKT’s dive. With the pressure they gained from this fight, it was simple for them to rush and secure the Baron at 25 minutes. Unlike the previous game, SKT did work to G2’s base with this, destroying multiple towers and an Inhibitor by the time the buff expired. But because they couldn’t deliver the finishing blow, they had to wait for the second Baron.

Fortunately for them, G2’s Caps and Wunder overextended bottom to give SKT two more kills as this Baron spawned. SKT claimed the second Baron before sieging G2’s top lane, but G2 managed to mount a defense and repel them. After this, they saw an opening to take the Elder Dragon, but as they rushed it down to low HP, Clid Flashed into the pit and stole it! SKT promptly arrived to back their jungler up and Ace’d G2 in the team fight. At this point, SKT ran straight into G2’s base and evened up the series score at 1-1. 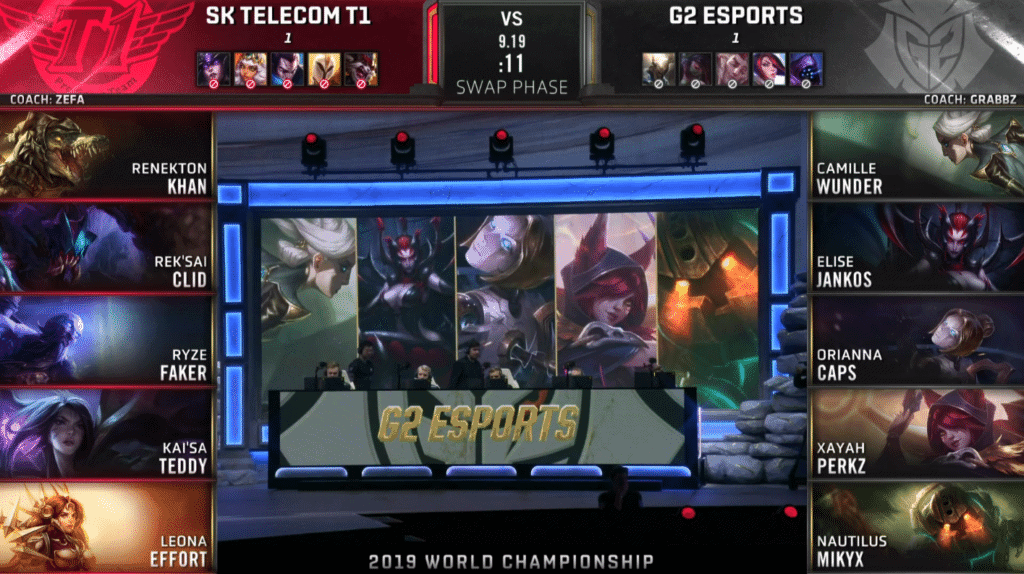 This Game Three brought viewers to match point in favor of G2. The early game was quite difficult for G2 too, as Khan solo killed Wunder at three minutes and Clid ganked a minute later to get Khan another kill. Crucially, Jankos ganked top to give Wunder a kill, then the two went mid, where Wunder found another kill. There were a number of skirmishes in the early-mid game that went in favor of both teams, and it was very close.

At 21 minutes, SKT attempted to rush the Baron, but G2 contested and killed Effort. It was a setback, but a minute later SKT killed both Wunder and Caps, which gave them the Baron they wanted. The buff didn’t last long though because G2 forced a fantastic fight near the mid lane that they won four-for-two. After this, there were a couple of objectives taken but relatively low action. That was until 30 minutes when SKT rushed the Baron and secured it. The Baron dropped, but G2 still wanted to fight, and fight they did. G2 slaughtered SKT four-for-two again here and were back in the driver’s seat.

Because of this, G2 pushed and pressured the middle lane. When the Inhibitor tower fell, a team fight erupted. It was close, with Faker’s Ryze and Perkz’s Xayah both doing work. Perkz got the better hand though, as he got a Triple Kill and his team won the fight four-for-two once more. Seeing their chance, G2 pushed through the rest of the base, grabbed two more kills, and demolished SKT’s second Nexus. The trend of 3-1 series victories at this World Championship continued as G2 defeated the Korean dynasty SKT and triumphantly claimed their spot in the Finals. Like the rest of the games, it was a very close one with narrow margins paving the way to victory. Jankos, the LEC Summer MVP, started it off by throwing an ax at Teddy to finish him off for First Blood under his tower. But shortly after, Jankos was killed by Clid as he tried to kill an Ocean Dragon. SKT did come out to a lead though due to a roam top from Faker and a team fight bottom, where they went up four-for-one in kills overall.

SKT pushed this advantage through tower takes and picks onto multiple G2 members. It was looking great for them as they accumulated a 5k gold lead, but it suddenly turned on its head. It all began in the mid lane, where a team fight broke out and G2 fully capitalized, winning it four-for-three. A minute later, G2 found another winning fight that netted G2 three more kills for only one of their own. SKT actually managed to clap back though at 23 minutes, when SKT took a three-for-one fight and the Baron too.

This Baron didn’t last long though, as G2 picked off Faker, stalling the siege, then winning a close four-for-three team fight to defend all of their Inhibitors from SKT. The brawl wasn’t stopping either, and G2 defeated SKT in another fight two-for-zero to take their own Baron. This spelled doom for SKT, as G2 took the bottom Inhibitor and applied significant pressure. But it was actually SKT who forced the final fight, as they pushed and tried to take G2’s middle Inhibitor. G2 was happy to have SKT delivered to their doorstep and engaged right on them. It was a slaughter, as G2 cut down every single SKT member and rushed their base. With this final Nexus kill, G2 knocked the Korean superstars out of the tournament and punched their tickets to the Finals.

Watch the 2019 World Championship here at ESTNN TV. For more information on the tournament, teams, standings, and players, visit www.lolesports.com. Stay tuned here at ESTNN and follow us on Twitter and Facebook for more League of Legends news, articles, opinions and more.